Operation Others Trick or Treat Brings in Donations 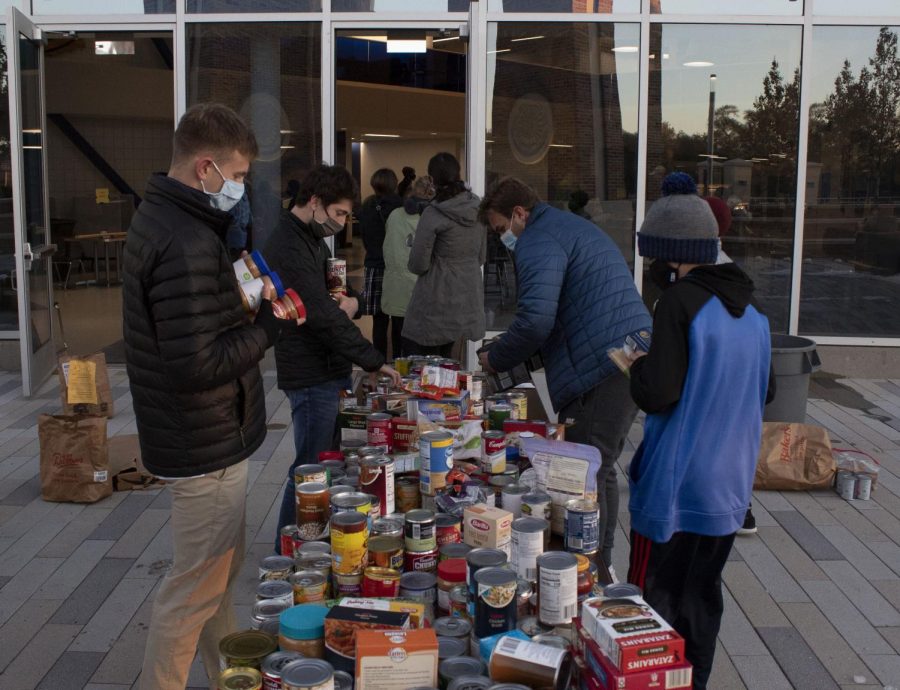 Every year as the first semester rolls onward, students often hear over the intercom during Community Period a member of Operation Others asking for donations to the O.O Mission Collection. You can probably recall that the goal for each student is a dollar, or that the money collected goes toward providing food assistance to families in need for Christmas. How does your money go from your hands to food for families though? What else does Operation Others do to achieve their mission?

To answer the first question, we turn to Mr. David Lawler. Lawler is Director of Campus Ministry and is one of the leaders for Operation Others.

How else have students and community members given of themselves recently for the club and what opportunities lay ahead? At the end of last month, Operation Others held Trick or Treat for Cans. Before the event could happen, however, students had to deliver paper bags to houses in the surrounding neighborhood with instructions on how to participate. On the evening of the event, more students then went out to collect the food people put into the paper bags. After all of the food was collected and brought back to the school, it was sorted and packaged to be part of the big delivery of food.

Usually a great deal of people from both Prep and other Catholic schools in the area come to lend a helping hand, but the pandemic forced some changes to be made in order for everybody to remain safe.

“We had to do [a sign-up] because we had to limit the amount of people who could be here just so we didn’t get too big of crowds and have a possible spreading of the virus,” O.O Core Team member Sam Malick said. “[The Core Team] also met earlier in small groups to figure out other logistics like who was going to go in what car, how many people could go in cars, where we were going, [and] where we would be placing bags in the first place.”

Another change that had to be made was the absence of a large group Halloween costume contest. One thing that makes this event very memorable to Core Team and club members is that every year at the start of the event, people who dressed up in halloween costumes would be lined up and everybody would collectively decide who had the most creative costume. While students were still invited to dress up, in order to maintain social distancing, the restriction had to be made.

Despite changes made, the event still proved to be a success. Every bag of food donated was collected and added to the total tally of food. Laughs were still shared and people still worked as hard as ever to make sure everything was properly sorted and ready to go. Most importantly, the importance of this event to the mission of Operation Others was not forgotten.

“I feel Trick or Treat [for Cans] is really important to the greater O.O community. With this event, we allow the community around Prep to come together and help feed people that are food insecure [by] putting in the bags together… we get a lot of our food out of this event for free. Most times, we would have to pay the Food Bank to get food… instead [we] get the gracious offerings from the community,” Core Team member Timothy Chase said.

In the month of November, Operation Others still has more opportunities for students to get involved. As always, students will continue to have a chance to pitch in to the mission collection during CP. Other than those collections, you might have seen a table set up near the entrances of the school this past week. O.O’s annual Food Drive means that the food that is dropped off there will, like everything else, be a contributor to the total food tally. Also coming up soon is the annual Turkey Drive on November 21st, where many turkeys are brought in and gathered so that every family may receive a turkey in their food delivery. The food delivery always happens in December and will take place on the 19th this year, right after a busy week of final preparations.

Although every year food assistance is a serious need, the pandemic that has affected everyone in different ways has exacerbated the need this year.

“Food pantries in town have already shared with us that there is a much greater need for food right now… I am confident that because the need is greater right now, that the Prep community will step up and be extra generous this year,” Lawler said.