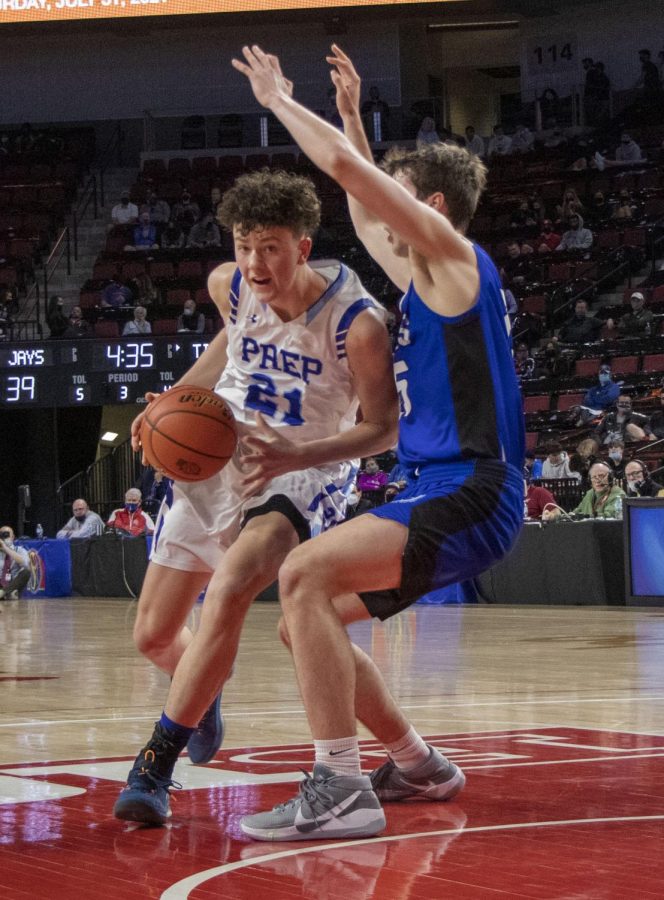 We may have just seen the worst possible ending to the best possible class of seniors in Prep history.  That one point deficit that remains on the Pinnacle Bank Arena scoreboard (95-94 after 3 overtimes) may haunt these Junior Jays forever, and with good reason.  But I’m not writing this to complain about the officiating (especially the game-ending sequence) or about how Frankie Fidler and Chucky Hepburn proved to be too much for the Prep defense (for the THIRD TIME this year).  This was a season that saw the Junior Jays attain a national ranking as high as #22 and go undefeated against any team not named Bellevue West.  So, don’t consider this a requiem for a season in which Prep came up agonizingly short; but rather, a celebration of an incredible, high-flying, amazingly fun, never-to-be-forgotten season.

Week 1 (note: a week is either 2 games or a tournament appearance): The #3 team in Class A opened their season nicely with a 2-0 record.  The team dominated Grand Island in the opener, winning 51-33 and holding Isaac Traudt to a season low 28% FG and his 3rd lowest scoring output of the year, then shot 55% FG and 58% 3PT in a 62-40 victory over Papillion La Vista.  Luke Jungers had 25 points and Brendan Buckley added 22 over this stretch.

Week 2: After a dominant 73-30 victory over the Huskies of Omaha Northwest (7 players with 5+ points), Prep faced their first test, surviving Millard West on a tip in by Luke Jungers (12 points) to win 42-40.  The team had a firm grip on the #3 spot by this point and was playing impressively enough that I said “this team has no real weaknesses”.

Week 3: Prep runs Gretna out of the gym in a 65-47 victory behind 42 points from the starters alone and a 51-50-67 split, then turns around and avoids a loss by winning the fourth quarter against Lincoln Southwest 19-11-and thereby the game, 74-67.  Casey O’Malley had his breakout game against the Silverhawks with 19 points on 6/9 shooting, and to this point, Prep has shot under 50% as a team just once en route to a 6-0 record.

Metro Holiday Tournament: Prep was ¼ of the most impressive semifinal bracket in tournament history (no losses between the 4 teams), and despite a loss, appeared to have a legitimate claim as the future title winner.  Prep opened the tourney with an 86-55 win over Omaha North (once again shooting over 50%), helped along by Justin Sitti’s 18 points.  The game against arch rival Westside was dramatic, but Prep was able to come back from a 20-6 first half deficit and weathered 24 Tate Odvody points in a 61-57 victory behind a double double (16 points, 15 rebounds) from AJ Rollins and a junior Rollins (12 points, 7 rebounds) from Luke Jungers.  However, the Junior Jays would finally taste defeat in the 2020-21 season against Bellevue West (moving to 8-1), losing 73-64 despite a career high 21 points from Justin Sitti and 17 from Brendan Buckley.  In what would become a theme for the team, the Thunderbirds’ dynamic duo of Chucky Hepburn and Frankie Fidler would prove too much, with Fidler scoring 30 points and Hepburn double-doubling (and adding 5 steals).  Interestingly, the team shot 49% in the loss.

Week 5: Prep bounced back rather easily from their first loss, with two double digit victories against overmatched teams.  Omaha South went down 63-43 as Prep had 3 players in double figures and won the rebounding battle 44-23.  Against Millard South, the team won 54-37, with Brendan Buckley putting up a season high 21 points and the Patriots being held to just 30% shooting.  This week would start an impressive streak, with the team winning 7 straight games by 12 or more points.  This would see Prep basketball at its peak: team-oriented offense, dominance on the boards, stingy defense, and lots and lots of winning.

Week 6: Two more unranked teams fell to the might of the Junior Jays, with Fremont and Bellevue East being the victims this time.  Against Fremont, Prep pulled away in the second half with great defense to win 56-41, holding Fremont to just 4 points in the final frame.  Rollins paced the team with 16 points, as well as grabbing 8 boards. Against Bellevue East, Prep won 72-37 with AJ Rollins and Mai’Jhe Wiley combining for 31 points by themselves and the team forcing 16 turnovers, and this week ratcheted Prep up to 12-1.

Week 7: Coach Josh Luedtke etched his name in the Prep record books forever by, earning his 342nd win as the head coach here.  It was all the sweeter that the victory came in a dominant performance against Westside, with the Warriors shooting just 30% and committing 14 turnovers as Prep dominated from tip to buzzer in a 62-39 victory.  Luedtke would, of course, continue his winning ways, and now sits at 352 career wins with no signs of stopping anytime soon.  Prep was able to continue asserting themselves as a title hopeful in Class A with a comfortable 66-54 win over Papio South.  The Jays pulled away behind 28 third quarter points and 3 starters in double figures.  Prep was now sitting at 14-1, and their next matchup was another 14-1 team, in this case, Bellevue West.

Week 8:  That game will forever be known as the “Chucky can’t shoot” game, in which Chucky (Hepburn) revealed that he could indeed shoot, garnering 32 points, 8 rebounds, and 7 assists while twice dragging the Thunderbirds from down 11 before leading them to a 79-77 overtime victory.  Justin Sitti again scored 21 and Brendan Buckley added 16, but Hepburn going ballistic combined with a big loss in the rebounding department sealed the Junior Jays’ second loss of the season.  After such a crushing loss, the team was primed for a letdown game against Papillion La Vista.  Luckily for the sanity of all Prep fans, however, Justin Sitti hit a game-winning layup with 4 seconds remaining to seal the 51-50 overtime victory.

Week 9:  The team then took that momentum and ran with it, easily handling Lincoln Northeast led by Luke Jungers’ 17 points in a 54-37 win.  The Junior Jays also forced the Rockets into 16 turnovers, one of their best defensive games of the year.  The team then started the home stretch by going on a 20-3 first quarter run en route to a 74-44 victory over Burke in which Luke Jungers put up 17 points.

Week 10/Regular Season Finale:  Heading into their final week of the season, the Junior Jays were rolling.  First, they dealt with Bryan, seeing 3 players score double figures in an 86-54 win.  The team forced 15 turnovers, a sum they surpassed 3 times this season.  That game was followed a week later by Prep’s biggest victory of the season, a 76-75 road victory over nationally ranked Millard North.  The dramatic win was sealed by a pair of Justin Sitti (15 points) free throws, and despite 27 points from Hunter Sallis, the low post men of Prep (Rollins and Jungers) combined for 32 and the Junior Jays escaped.  When that game was followed up by the defense stifling Omaha Central in a 49-39 win, Creighton Prep finished their regular season with a 20-2 mark, the 1 seed in District A3, and a national ranking.  The team by this point had hit their absolute peak, and it seemed like almost nothing could stand in the way of a fourth title for Coach Luedtke.

Districts: Maybe a week off right as the team was cresting wasn’t the greatest idea.  The Junior Jays were locked in a tough game with Bryan for some time (thanks to 31 points from Jai’Lyn Spears) but managed to pull away in the second half behind a great press break and 22 points from Mai’Jhe Wiley to win 63-50.  Against Elkhorn South, the team came out firing and had a 23 point lead heading into the fourth quarter, eventually winning 62-50.  Wiley had 18, AJ Rollins added 12, Luke Jungers chipped in 19 and when it was all said and done, the Creighton Prep Junior Jays were district A-3 champions and headed to Lincoln as a #3 seed.

State: The Papillion-La Vista South rematch was far more dramatic than the first installment, mostly due to Graham Cassoutt of the Titans exploding for 18 points.  However, Prep put 5 players in double figures and shot 61% for the game (their fourth highest mark of the year), and when the dust settled, the Jays were going to the state semifinals courtesy of a 64-56 win.  The only thing standing in their way was a third matchup with the Thunderbirds of Bellevue West.  And boy oh boy, did that game live up to expectations.  Frankie Fidler had 19 first half points for the Thunderbirds to lead them to a 33-29 halftime lead.  In the second half, AJ Rollins and Justin Sitti took over for a time and gave Prep a 7 point lead, but then Chucky Hepburn reminded everyone who he was, carrying the Thunderbirds to a 68-68 tie and extra basketball.  In the first overtime period, Sitti had a chance to win it but missed a pair of crucial free throws, and in the second OT, Josiah Dotzler of Bellevue West tied it with just seconds remaining.  In the third extra period, free throws from Dotzler and Hepburn (who had 23 points after halftime) gave Bellevue West a close-to-insurmountable lead, and despite a Mai’Jhe Wiley three with about 6.5 seconds to go, the ball was never inbounded and the Thunderbirds held on to a 95-94 victory…and a spot in the state title game.  Rollins had 22 (tying a career high) and 12 rebounds, Brendan Buckley led the team with 26 points, and Sitti added 19, but once again, Bellevue West and Hepburn proved just slightly too much for the Junior Jays, and the season ended with another team celebrating a win that many believed should have been Prep’s.

In conclusion, yes, the way this season ended hurts.  A lot.  But the very fact that it hurts is a testament to just how great it was.  Look at all the things the team did this year: 23-3 record, national ranking, all-time wins record for Coach Luedtke, a district title, a state semifinal berth, playing in possibly the best game in Class A history…and those are just off the top of my head.  When the Class of 2021 comes back to 74th and Western in about 15 or 25 years, I hope that after all the reminiscing about the pandemic, talk turns to the basketball team.  I hope that when people talk about this team, they remember not the hurt, but the joy.  Because there was hurt, but I can say this with no hyperbole whatsoever: this was the most fun, entertaining, incredible basketball season I have ever followed, and I hope everyone else can realize that too.

Thank you all for following this series and I’ll see you again next year.