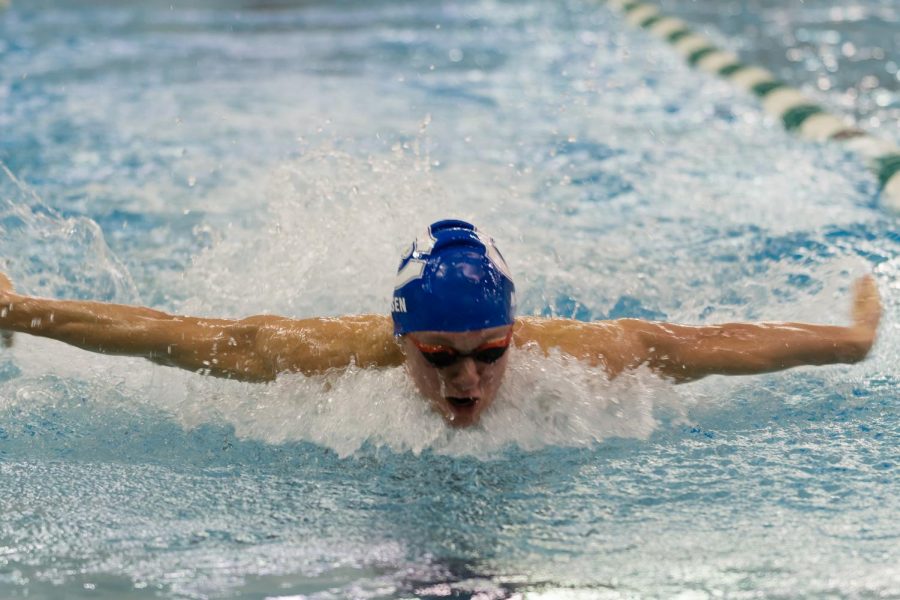 After losing their legendary 14-year winning streak at the State swimming meet to Lincoln Southwest, things on the horizon for Prep swimming are looking bleak; or are they? This year’s swim team captains Andrew Hood and Benjamin Ravnsborg certainly don’t think so. The two leaders of Prep’s swim team this year are shaken but not stirred after this year’s loss, and are surprisingly optimistic about the future of  Prep Swimming.

“Once we left the pool, we kind of realized that it’s not the end of the world. We are gonna recover, and there’s always next year.” Ravnsborg said.

Hood followed up this sentiment by confirming that Prep swimming won’t suddenly decline in quality after the loss this year; in fact the quality of the team might even rise in response to this year’s loss.

“We’ve always had a strong base. The number on the trophy doesn’t change the fact that Prep swimming reloads every year,” Hood said.

Both captains are extremely optimistic about next year’s team, listing off many promising underclassmen such as John Watson, Drayton Beber, and Benjamin Militti, as prime candidates to take leadership over Prep’s team next year. One thing’s for sure; Prep swimming will be gunning to take the title back next year, and will come to take their trophy back with a vengeance.

But what happened this year at the state meet that caused Prep to lose? Well, prior to the meet, the Prep team was a heavy underdog, with Lincoln Southwest being seen as a comfortable favorite to win.

“The expectation of us was definitely going in as the underdogs.” Hood said. “Everybody’s always rooting against us.”

This antagonistic morale of the crowd and the public definitely had an effect on the team during the meet. According to Ravnsborg and Hood, the spectators of the meet were rooting for the Prep team’s fall from grace and loss of their streak of wins, and the commentators’ keeping track of how many points ahead of Prep the Southwest team was was definitely a hard hit to the Prep team’s morale.

“During finals, we came out and got punched in the mouth pretty hard.” Ravnsborg said. “I just wish that we could have kept the team morale up a little bit more.”

Hood continued the sentiment and said, “It’s an emotional toll on those guys, whereas Southwest is getting a boost in their morale. That swing is just an unfortunate consequence of the success Prep’s had in the past.”

However, despite the blow to the team’s morale, both captains were overwhelmingly happy with the team’s overall performance at the meet. In nearly all races, the Prep team was swimming above their seeds, and still managed to get the score differential between Southwest and Prep into the single digits. Pretty good for a team who was predicted to lose by 100 points.

Both seniors have one person they want to thank for their success and wonderful years swimming at Prep; their coach, Tom Beck.

Overall, although the result was not what the Prep team wanted, they are not disheartened by the loss in the slightest. If anything, the team will come for the championship title harder than ever before. So don’t be alarmed or disappointed, Prep swimming fans; Prep swimming is here to stay.