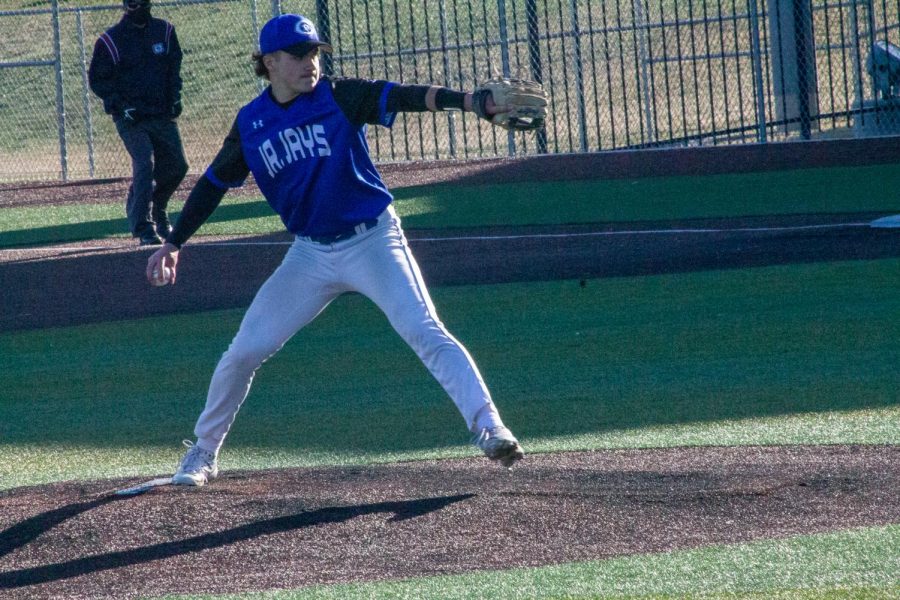 Last year, Creighton Prep baseball had their season pushed back into the summer months due to the COVID-19 pandemic.  The team entered the postseason tournament at 14-16 and just looked to end the season on a high note.  It turns out that the high note was becoming tournament champions.  The Junior Jays have parlayed that momentum into a strong start to the 2021 season, and currently have a 7-5 record after starting 5-0.  Head coach Pat Mooney, senior pitcher Will Volonec and senior infielder/catcher Kalen Piechota explained the reasons for the team’s recent success-and why they think it will last.

The ability to play in the summer was big for the team, which otherwise wouldn’t have gotten the experience and the title chops.

Volenec added that the experience “proved to us that we could really play with the best teams in the state”, and both expressed pride in the team’s performance down the stretch, especially against foes like Westside and Millard West.

“My mentality changed as soon as I knew we were playing against Westside, because we obviously own Westside,” Volenec said.

What impresses Mooney most about this team isn’t necessarily the experience, but the depth and preparation of the team.

“We can march out 10, 12 guys that are going to compete with anybody,” Mooney said. “What we got to experience over the summer worked out for the best of us”.

Mooney is also glad the team got to experience a fall season as well, saying that it allowed the team to make up the time that they missed.

“A lot of guys wanted to come up and be the leaders…everybody connected in some way, shape or form,” Piechota said.

The team’s focus has also been clear from the jump.  Volenec acknowledges the impact the pandemic has had on the team’s mentality, saying that it wasn’t a given that they were going to play every game so guys wanted to do their part to make sure they could.  However, it isn’t all laser focus with no room for anything else: the team is still close-knit even in not-so-serious ways.

“I just like the excitement…they seem to be having a lot of fun with one another,” Mooney said.

The head coach acknowledged that part of the focus is helped by confidence the players have in themselves and their teammates.  Volenec talked about how preseason practice with live batters helped get him locked in, and Piechota mentioned sophomore Grant Wagner hitting a double in his first varsity at bat in the Central game.

That confidence has led to extraordinarily high expectations for this team, shared by all throughout the program.  The coaching staff and players believe that the sky’s the limit for the team.

“I think if we stay focused and don’t mess around, I have full confidence in our team as a whole,” Volonec said.

Piechota says that the team’s great pitching staff will help lead them throughout the season.  “I think we can be the best team in the state,” the senior said.

While the team may not have kept an undefeated record, they appear to have a high ceiling, and it wouldn’t be a surprise if they finished 2021’s season the same way they finished 2020’s: holding up a trophy.

“If we can get into the state tournament and get past Day 2, I think we could make a run at it,” Mooney said.