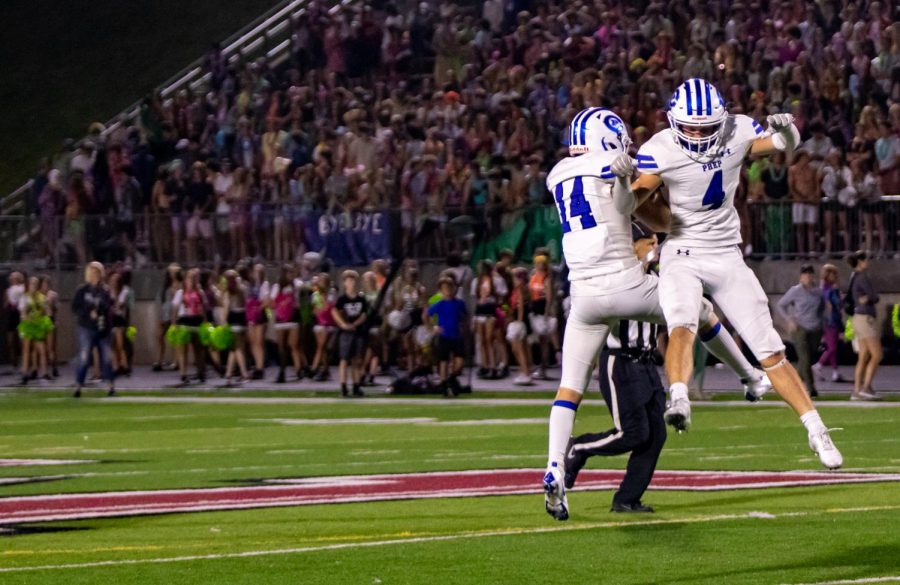 The fourth-ranked Creighton Prep Junior Jays prepare to do battle with their third unranked team of the year, although this one has the best resume of any of those three.  The North Platte Bulldogs are 4-1 this year with no victory coming by less than 23, but their lone loss was a 42-14 blowout against Kearney.  The rest of their performances have been solid, but Prep has been improving every week, and are now on a two game winning streak, including a comeback win against Millard West.  Both teams are on two game winning streaks with their defenses showing out, but both defenses are likely to be stretched to their limit this Friday.

North Platte’s game plan is simple: run the ball, run the ball, run the ball some more…and pass only if there is a brick wall in the running lane.  They’ve already got 2 players with over 40 carries, senior Vince Genatone (560 yards and 9 touchdowns) and junior Brock Roblee (433 yards and 3 touchdowns).  Their quarterback, Caleb Tonkinson, runs their option-style offense very well, and he’s only thrown the ball 22 times this year.  He’s also had 30 carries already for 91 yards and 4 scores, but overall this offense is solid and can be relied on for 300 rushing yards a night.  However, the one game they didn’t reach that mark, they lost by 28 to Kearney, so Prep’s defense has their work cut out for them.

North Platte’s defense has also done a good job.  Excluding the Kearney game, they haven’t given up more than 14 points in a game yet.  Genatone leads the team in tackles as well, with 65 of them so far and 8.5 for loss.  The second leading tackler for the team is Caleb Kinkaid, who’s got 37, as well as 5 sacks on the year.  The defense as a whole is, much like the offense, solid and dependable, with 13 total sacks and 5 forced turnovers.

Creighton Prep’s offense is based on one of the best running backs in the state.  Marty Brown ran over, around, and through Millard West for 250 yards, much like he’s run over, around, and through most of Prep’s opponents this year.  He’s got 583 total yards and 7 touchdowns on the year.  On the rare occasions when Brown can’t get the team 6 yards a carry (that’s his actual figure this year), Jack Stessman can step in.  The senior back has 152 rushing yards and 2 scores on the year, and has been the perfect complimentary back.  Meanwhile, senior quarterback Jack Piernicky has been a capable leader of the offense.  He’s thrown 99 passes and completed 46 of them, for 581 yards and 5 touchdowns (to 6 intersections).  He made several key throws in the Millard West game and does a great job at making sure Prep doesn’t beat itself.

There’s a pattern here, and it’s not too difficult to see.  When good rushing teams play Prep and underperform based on their season average, they lose.  When they play Prep and win the turnover battle, have great field position, and stop Prep in the red zone, they win.  North Platte has been running all over opponents, except for Kearney, who beat them 42-14.  Kearney lost to Millard West by 23.  If my math is correct, this Creighton Prep team is currently 51 points better than this North Platte team.  They won’t win by that much…but it’ll certainly be close.

My final prediction is 38-7 Creighton Prep.