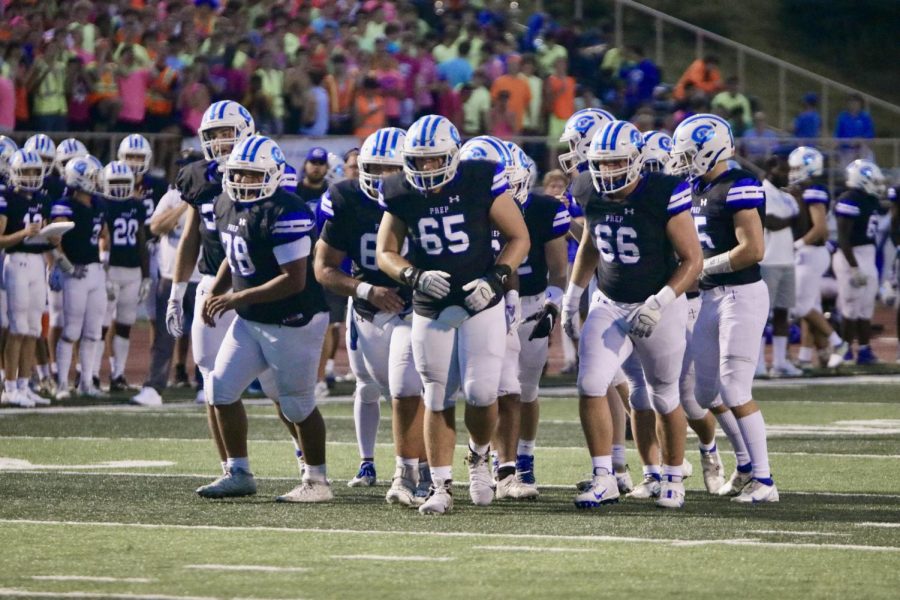 It was pretty clear that this game against Lincoln Northeast was out of hand before the second quarter even started.  With 2:40 to go in the opening frame, it was 21-0 Junior Jays, and they made it 41-3 (my final score prediction) by the half.  From there, both teams would get one more touchdown apiece to make the final score 48-10.  It was a dominating performance with each facet of the game coming up Prep.

It all started with the defense.  They forced a fumble on the first play, but then the offense lost the ball on the Northeast 5 yard line.  The defense then decided to take matters into their own hands and Cayden Russell returned an interception to the end zone to open the scoring.  After a Jack Kirkwood interception, Marty Brown got his first touchdown of the evening and it was 14-0 before the first half of the first quarter had elapsed.

On Prep’s next drive, a hook and ladder to offensive lineman Rocco Marcelino resulted in a 57 yard touchdown.  Prep’s next offensive drive led to a blocked punt and Northeast ball at the 1, but the Junior Jays defense held and forced a field goal.  Marty Brown got his second score of the night a bit later, then after a Jack Stessman touchdown with 3:14 to go, Brown capped off his incredible half with a 32 yard scamper that made it 41-3 Jays.

The running clock was turned on after halftime, and after a long Lincoln Northeast touchdown drive, Brown scored his fourth touchdown of the night.  The Rockets only really threatened the end zone once more, and that drive was stymied by a 4th down tackle for loss by the Junior Jays defense.

How this game got out of hand is pretty simple: Prep shut down a team that is heavily reliant on the running game and had a short field on about half of their offensive drives.  The Rockets had just 81 rushing yards, and even their passing attack was iffy, with just 120 yards on 22 attempts.  Lincoln Northeast also lost the turnover battle 4-1, and giving this Prep offense 3 extra possessions is basically asking to lose.

These games are some of the best kinds of games to watch as a fan.  Prep came in as the better team and they played like it for the whole game.  Complacency can occasionally be an issue when there is a talent gap, but there was no complacency from the Junior Jays.  The defensive intensity especially was turned up to 11 the entire game.

At this point in the season it is a battle to stay at home in the playoffs for as long as possible, and Prep’s first month or so of the schedule was very unhelpful for that goal.  At this point, though, it’s no longer unreasonable to suspect that Prep could win out.  In fact, if the defense continues to play like they did in this game, they may not need home field advantage.  And that might be the best kind of game to watch as a fan.  Get ready to head on down to Lincoln this November, because the Junior Jays are pretty good at winning in the state capitol.