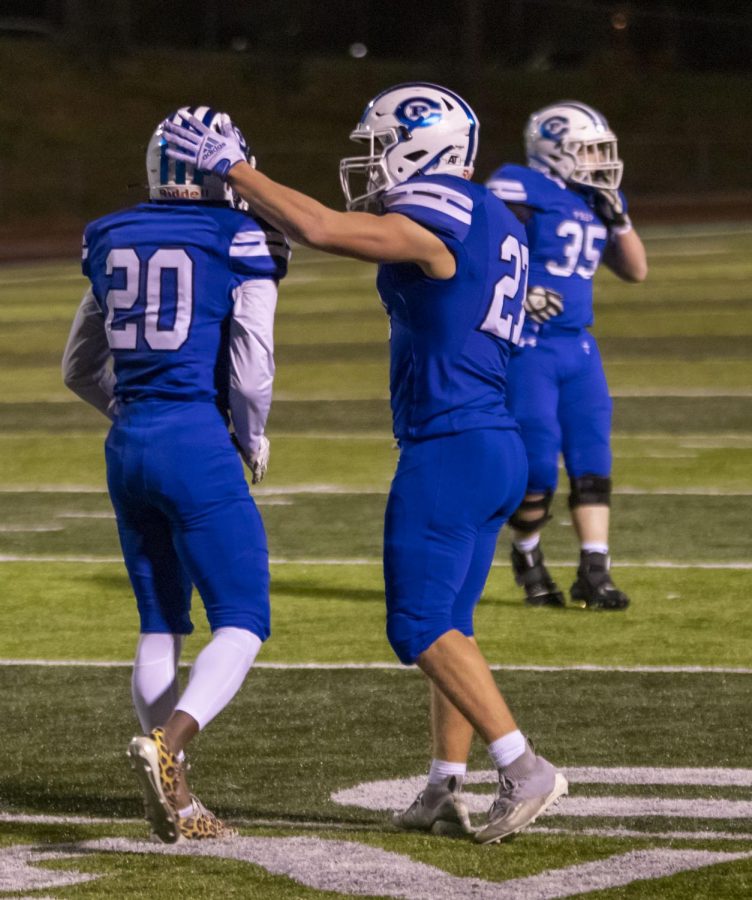 This is fairly emotional for me: this is-barring something miraculous-the last piece I will write about Creighton Prep football in my high school career.  So, rather than the traditional game and season recap, we’ll write this in the form of a thank you.

Firstly, thank you to Jack Stessman.  Jack was forced into the starting spot at the most important position on the team when the lights were brightest, and he responded by rushing for 225 yards and 3 touchdowns.  That puts him at over 750 rushing yards on the year to go along with 14 touchdowns.  He was without doubt Prep’s offensive MVP in the Grand Island game and did everything he could to get the victory.

Thank you also to Trey Olden, for stepping up when the team needed you most.  Your 4 catches for 85 yards are second in value only to the insight you have provided me about the team this year.  One of the most underrated, humble players on an offense full of them.

Thank you to Jack Piernicky.  You proved a lot of people (including me) wrong this year by bouncing back admirably from two opening losses.  Leadership is one of the most important qualities of a quarterback, and you have it in droves.  Your 115 passing yards don’t tell the full story: this team could and did follow as far as you could possibly go.

To Marty Brown, thank you for being quite possibly the most talented player I’ve seen in my Prep career.  It’s a shame your season had to end early, but with 1067 yards and 15 touchdowns, you had nothing else to prove.  Get well soon and I can’t wait to see the D1 offers roll in next season.

To Thomas Leiden: thank you for being there whenever we needed a big catch.  Every third and long, the offense was looking for number 11 across the middle, and more often than not, you came through.  500 receiving yards on the year is a fantastic achievement.

To the rest of the offense-guys like Jack Kirkwood, Andrew Joppa, George Egan, and Aidan Morey: thank you all for an incredible season.  Putting up almost 33 points per game is an incredible feat, and you all earned it.

On to the defense.

Firstly, Ryan Kearney.  Ever since the scoop and score that punctuated the wild Millard West comeback last year, you have been an absolute beast.  3 sacks and countless pressures on Kytan Fyfe were huge when the offense was slow to get going.

The other sack artists on this team-Mick Tabor, Asher Anderson, Joe Kieny, Michael Barrett-played lights out as well.  Obviously the scoreboard says that this is the most points the Junior Jays gave up this year, but that shows two things.  First: great work all year; giving up just 16 points a game shows how great you guys played.  Second: considering how out of his mind Kytan Fyfe was playing, the fact that Grand Island was held to just 30 is great as well.

To the secondary-Cayden Russell, AJ Jones, Sam Rodino, John Pargo, Riley Mahoney-you guys did just about everything right.  Kytan Fyfe was looking to score on every play and you guys all made sure that didn’t happen.  You guys have also been the causes of some of my favorite plays this year, especially the punt blocks.

To special teams: Ford Hamilton, Luke Fenton, and Pierce Johnson did their jobs incredibly well all year.  Ford became a steady kicker who would make the big kick when he needed to, 5-star foot Luke Fenton was one of the best kickoff kickers I’ve ever seen, and Pierce was the most dynamic man on the field not in the running backs room.  You guys also helped make this year wildly entertaining.

To the whole team: this was by far the best Junior Jays football team I’ve ever seen.  I will never forget this year and I hope you guys don’t either.

To the coaching staff: aside from being great coaches, you were also always very accommodating when it came to letting us talk to players and get some pregame information.  Thanks for all your help over the years.

To Mr. Rasgorshek: I would not be the journalist or person I am today without all of your help and guidance.  Thank you for looking at an eager sophomore and giving him the chance to talk football on a live mic.  Your help over these past three years have been completely invaluable.

To the rest of the media seniors-Cole, Nate, Rob, Andrew, Ben, Kameron-thank you for making covering Creighton Prep even more fun than it already is, even if some of you have fairly ridiculous sports opinions (Nebraska still won’t go 8-4, Nate).

To Alex Tietjen-I am privileged to get to work with you, and I hope you continue to grow as both a commentator and person.  Good luck next year, football broadcasts are your territory now!

To Tyler Reidy-well, a lot of what I said on the broadcast for the Lincoln East game could cover this.  Thank you for being a fantastic teammate, fantasy football opponent, fellow podcaster, co-commentator, and sports debater.  But most importantly, thanks for being a great friend.  Looking forward to a lot more sports talk this year!

And finally, to all those who have read, watched, or listened to any and all content I have ever put out regarding Prep football.  There is no joy in this work without the knowledge that you are enjoying it.  It has been one of the greatest privileges and joys of my life to be able to do this and get class credit for it, and it all happens because of you.

Thank you all, and have a great offseason.